What is shot peening? 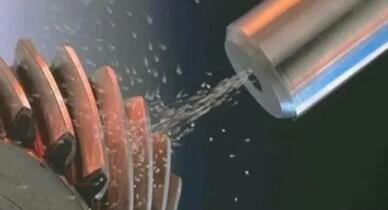 Generally, shot peening is used for regular shapes. Several throwing heads are up, down, left and right together, with high efficiency and little pollution.
In the shipbuilding industry, shot peening and sand blasting are widely used. Shot peening uses the high-speed rotating impeller to throw out the abrasive; Sand blasting is the use of compressed air to blow out the abrasive at high speed. Of course, shot peening does not have to use a high-speed rotating impeller. In the repair and shipbuilding industry, generally speaking, shot peening (small steel shot) is mostly used in steel plate pretreatment (rust removal before coating); Sand blasting (mineral sand is used in repair and shipbuilding) is mostly used in formed ships or sections to remove the old paint and rust on the steel plate and repaint it. In the repair and shipbuilding industry, the main function of shot peening and sand blasting is to increase the adhesion of steel plate coating paint.
The research shows that in terms of damage, when there is tensile stress on the surface of metal materials, it is much easier than compressive stress. When there is compressive stress on the surface, the fatigue life of materials is greatly improved. Therefore, shot blasting is usually used to form surface compressive stress for parts prone to fatigue fracture such as shafts, so as to improve the product life. In addition, metal materials are very sensitive to tension, This is the reason why the tensile strength of materials is much lower than the compressive strength. This is also the reason why metal materials generally use tensile strength (yield, tensile) to represent material properties.
The steel plate working face of our daily car is strengthened with shot blasting, which can significantly improve the fatigue strength of the material. Shot peening uses the motor to drive the impeller body to rotate, and by the action of centrifugal force, throws the balls (including cast shot, cut shot, stainless steel shot, etc.) with a diameter of 0.2 - 3.0 to the surface of the workpiece, so as to make the workpiece beautiful, or change the welding tensile stress of the workpiece to compressive stress, so as to improve the service life of the workpiece. Almost used in most fields of machinery, such as repair, shipbuilding, auto parts, aircraft parts, gun and tank surfaces, bridges, steel structures, glass, steel plates, pipelines, etc. Sand blasting (shot) uses compressed air as power to spray sand with a diameter of 40 - 120 mesh or shot with a diameter of about 0.1 - 2.0 to the surface of the workpiece, so that the workpiece can achieve the same effect. The treatment effect will be different if the size of the shot is different.
It is emphasized that shot blasting can also play a role in strengthening. Now the domestic equipment has entered a misunderstanding that only shot peening can achieve the purpose of strengthening. Enterprises in the United States and Japan use shot blasting for strengthening, and each has its own advantages. For example, for a workpiece such as a gear, the shot angle of shot peening cannot be changed, and the initial speed can only be changed by frequency conversion. However, it has large processing capacity and fast speed, while shot blasting is just the opposite. The effect of shot peening is not as good as that of shot blasting.

What is sand blasting?

Sand blasting is a method that uses compressed air to blow out quartz sand at high speed to clean the surface of parts. It is also called sand blowing in the factory. It can not only remove rust, but also remove oil. It is very useful for coating. Commonly used for rust removal on the surface of parts; Surface modification of parts (this is the purpose of small wet sand blasting machine sold in the market. The sand is usually corundum and the medium is water); In the steel structure, the application of high-strength bolts for connection is a more advanced method. Because the high-strength connection uses the friction between the joint surfaces to transfer the force, the quality requirements of the joint surface are very high. At this time, the joint surface must be treated by sand blasting.
Sand blasting is used for complex shape, easy to remove rust by hand, low efficiency, poor site environment and uneven rust removal. General sandblasting machines have sandblasting guns of various specifications. As long as they are not a particularly small box, they can put the gun in and clean it. The supporting product of pressure vessel - head adopts sand blasting to remove the oxide scale on the workpiece surface. One kind of processing is to use water as a carrier to drive emery to process parts, which is a kind of sand blasting.
Both shot peening and sand blasting can clean and decontaminate the workpiece. The purpose is to prepare for the next process, that is, to ensure the roughness requirements of the next process. In addition, in order to ensure the consistency of the surface, shot blasting can strengthen the workpiece, so sand blasting is not obvious. Generally, shot blasting is a small steel ball and sand blasting is quartz sand. According to different requirements, the mesh number. Sand blasting and shot peening are used in precision casting almost every day.
Supplement:
Add again (some repetition, some conflict):
1. Shot and sand
Shot is generally spherical particles without edges and corners, such as cast steel shot, steel wire grinding shot, etc; Sand refers to angular sand particles, such as cast steel sand, brown corundum, white corundum, river sand, etc.
2. Spraying and throwing
Spraying is to use compressed air as power to spray sand or shot onto the material surface to achieve removal and certain roughness. Polishing is a method of impacting the material surface with centrifugal force generated when the shot rotates at high speed to achieve removal and certain roughness.

The sandblasting process shot blasting uses high-pressure air or compressed air as power, while shot peening generally uses a high-speed rotating flywheel to eject the steel sand at high speed. Shot peening has high efficiency, but there will be dead corners, while shot blasting is more flexible, but the power consumption is large.
Although the two processes have different injection power and methods, they both aim at high-speed impact on workpieces, and their effects are basically the same. In comparison, shot blasting is relatively fine and easy to control accuracy, but its efficiency is not as high as shot peening. Shot peening is suitable for small workpieces with complex shapes. Shot peening is more economical and practical, easy to control efficiency and cost, and can control the particle size of pellets to control the injection effect, However, there will be dead corners, which is suitable for batch processing of workpieces with single shape and surface.
The selection of the two processes mainly depends on the shape of the workpiece and the machining efficiency.

Both shot blasting and sand blasting use high-pressure air or compressed air as power to blow it out at high speed and impact the workpiece surface to achieve cleaning effect, but the effect is also different due to different media.

The steel plate working face of our daily car is strengthened with shot blasting, which can significantly improve the fatigue strength of the material. Shot peening uses a motor to drive the impeller body to rotate, relying on the action of centrifugal force; Shot peening is usually a high-speed rotating flywheel that ejects steel sand at high speed.
Source: China Pipe Fittings Manufacturer - Yaang Pipe Industry Co., Limited (www.yaang.com)
∧TOP
Next: Installation and connection of copper pipes
Prev: List of Chemical Elements