DataTime:[2016-12-17]
October 19, 2016, Baton Rouge, LA -- Today the CSB released its final report (Final Report October 19, 2016: PDF file) into the June 13, 2013, explosion and fire at the Williams Olefins Plant in Geismar, Louisiana, which killed two employees. The report concludes that process safety management program deficiencies at the Williams Geismar facility during the 12 years leading to the incident allowed a type of heat exchanger called a “reboiler” to be unprotected from overpressure, and ultimately rupture, causing the explosion. 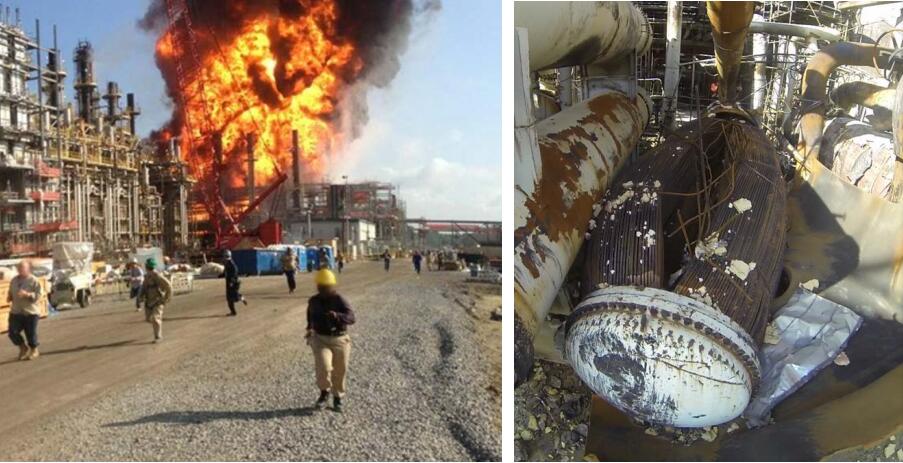 The Williams Geismar facility produces ethylene and propylene for the petrochemical industry and employs approximately 110 people. At the time of the incident, approximately 800 contractors worked at the plant on an expansion project aimed at increasing the production of ethylene.
The incident occurred during non-routine operational activities that introduced heat to the reboiler, which was offline and isolated from its pressure relief device. The heat increased the temperature of a liquid propane mixture confined within the reboiler, resulting in a dramatic pressure rise within the vessel. The reboiler shell catastrophically ruptured, causing a boiling liquid expanding vapor explosion (BLEVE) and fire, which killed two workers; 167 others reported injuries, the majority of which were contractors.
The CSB investigation revealed a poor process safety culture at the Williams Geismar facility, resulting in anumber of process safety management program weaknesses. These include deficiencies in implementing Management of Change (MOC), Pre-Startup Safety Review (PSSR), Process Hazard Analysis (PHA) programs, and procedure programs causal to the incident:
Failure to appropriately manage or effectively review two significant changes that introduced new hazards involving the reboiler that ruptured—(1) the installation of block valves that could isolate the reboiler from its protective pressure relief device and (2) the administrative controls Williams relied on to control the position (open or closed) of these block valves.
Failure to effectively complete a key hazard analysis recommendation intended to protect the reboiler that ultimately ruptured.
Failure to perform a hazard analysis and develop a procedure for the operations activities conducted on the day of the incident that could have addressed overpressure protection.
CSB Chairperson Vanessa Allen Sutherland said, “The tragic accident at Williams was preventable and therefore unacceptable. This report provides important safety lessons that we urge other companies to review and incorporate within their own facilities.”
The CSB case study on the accident at Williams notes the importance of:
Using a risk-reduction strategy known as the “hierarchy of controls” to effectively evaluate and select safeguards to control process hazards.  This strategy could have resulted in Williams choosing to install a pressure relief valve on the reboiler that ultimately ruptured instead of relying on a locked open block valve to provide an open path to pressure relief, which is less reliable due to the possibility of human implementation errors;
Establishing a strong organizational process safety culture.  A weak process safety culture contributed to the performance and approval of a delayed MOC that did not identify a major overpressure hazard and an incomplete PSSR;
Developing robust process safety management programs, which could have helped to ensure PHA action items were implemented effectively; and
Ensuring continual vigilance in implementing process safety management programs to prevent major process safety incidents.
Following the incident, Williams implemented improvements in managing process safety at the Geismar facility. These include, among others, redesigning the reboilers to prevent isolation from their pressure relief valves, improving its management of change process to be more collaborative, and updating its process hazard analysis procedure.
Investigator Lauren Grim said, “Williams made positive safety management changes at the Geismar facility following the accident, but more should be done to improve process safety and strengthen the plant’s process safety culture. Our report details important safety recommendations to protect workers at the Williams Geismar facility.”
To prevent future incidents and further improve process safety at the Geismar plant, the CSB recommended that Williams strengthen existing safety management systems and adopt additional safety programs. These strategies include conducting safety culture assessments, developing a robust safety indicators tracking program, and conducting detailed process safety program assessments.
The CSB also identified gaps in a key industry standard by the American Petroleum Institute (API) and issued recommendations to API to strengthen its “Pressure-relieving and Depressuring Systems” requirements to help prevent future similar incidents industry-wide.
Chairperson Sutherland said, “Most of the accidents the CSB investigates could have been prevented had process safety culture been a top priority at the facility where the incident occurred. These changes must be encouraged from the top with managers implementing effective process safety management programs.”
The CSB is an independent, non-regulatory federal agency charged with investigating serious chemical accidents. The agency's board members are appointed by the president and confirmed by the Senate. CSB investigations look into all aspects of chemical accidents, including physical causes such as equipment failure as well as inadequacies in regulations, industry standards, and safety management systems.

The Board does not issue citations or fines but does make safety recommendations to plants, industry organizations, labor groups, and regulatory agencies such as OSHA and EPA. Visit our website, www.csb.gov.  For more information, contact Communications Manager Hillary Cohen, cell 202-446-8094 or email public@csb.gov.

∧TOP
Next: The structure characteristics and disadvantages of flat welding flange
Prev: List of Chemical Elements