Fasteners and Their Types

Fasteners come in many forms, sizes and materials. There are many different types of fasteners which are used primarily for attachment. The most common types of fastener include: screws, bolts, nuts and washers. Fasteners can also be classified as structural or mechanical depending on whether they are designed to resist bending moments, torsion or shear stress or provide rigidity to a component by transferring compressive forces between two planes. 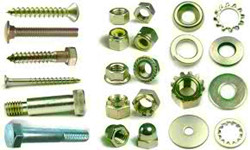 Fasteners are used to mechanically join two or more objects together, either permanently or non-permanently. There are many different types of fastener, each with its own purpose. Categorized as either Permanent or Non-Permanent. Permanent Fasteners, such as rivets and nails, are single-use fasteners that are designed to permanently join two materials or parts.

Non-Permanent fasteners, on the other hand, are designed to allow for easy removal and re-use. Fasteners such as bolts and screws are commonly used.

Threaded Bar, often referred to as a stud, is a rod of varying length that is threaded in a helical structure.

Stud bolts are externally threaded fasteners without a head used with 2 nuts on either side, substituting a usual “bolt & nuts” assembly. Used in flange connections.

These are widely used in construction and masonry or stone industries and are used to connect structural and non-structural material to concrete or other materials. This is generally installed by drilling a larger hole, compared to the fastener diameter, and in the base material and then the anchor is inserted into the hole to a depth known as embedment depth. These are generally of two types: mechanical anchor fasteners and chemical anchor fasteners.

A U-bolt is a bolt that is shaped like the letter U. This tool has screw threads on each end, and it is used to support pipes and pipe works through which gases and liquids flow. U-bolts can also be used to hold ropes together and their curved shape allows them to fit firmly around tubing or pipes, making them secure. They are mostly used for piping solutions.

U-bolts come in various materials, but they are generally made of durable, non-corrosive metal. Some common materials include 316-stainless steel, plain carbon steel, and 304-stainless steel. To prevent corrosion and other damages, manufacturers may add protective coatings

Hex bolts are a unique style of fixing used throughout the construction, automobile and engineering industries.

Hex bolts are named for their shape because the head of each bolt has six sides, not because they’re cursed. It’s a hexagon shape and that’s why it’s so easy to identity hex bolts.

Washer, machine component that is used in conjunction with a screw fastener such as a bolt and nut and that usually serves either to keep the screw from loosening or to distribute the load from the nut or bolt head over a larger area. For load distribution, thin flat rings of soft steel are usual.

A washer is a thin plate (typically disk-shaped, but sometimes square) with a hole (typically in the middle) that is normally used to distribute the load of a threaded fastener, such as a bolt or nut.

Screws and bolts are used to fasten materials by the engagement of the screw thread with a similar female thread (internal thread) in the matching part.

Screws are often self-threading (also known as self-tapping) where the thread cuts into the material when the screw is turned, creating an internal thread that helps pull fastened materials together and prevent pull-out. There are many screws for a variety of materials; those commonly fastened by screws include wood, sheet metal, and plastic.

Pipe clamps are used to clamp a pipe to a flat surface — traditionally of two styles, grip type (anchor) or Non-grip type (saddle/guide). Grip or Anchor clamp: used when the pipe requires a tight clamping to restrict all movements

In this blog, I have tried to explain the term Fasteners and also try to detail different types.

∧TOP
Next: Why must the customer ask about the tolerance when inquiring about stainless steel plate?
Prev: List of Chemical Elements