What is pitting corrosion?

Pitting corrosion is also called small hole corrosion, pitting corrosion or pit corrosion. It is a form of corrosion damage in which most of the surface of the metal does not corrode or corrodes very slightly, but small holes of corrosion appear in local places and develop deeper. Some corrosion holes exist in isolation, some corrosion holes but compact together, looks like a rough surface. Etching holes can be large or small, but generally are relatively small, as shown in the following cross-section of different pitting pits, in terms of size, the depth of the etch hole is generally equal to or greater than the diameter of the etch hole. Pitting is one of the most harmful forms of corrosion of duplex stainless steel. Etching holes are often the beginning of stress corrosion cracking and corrosion fatigue cracking. 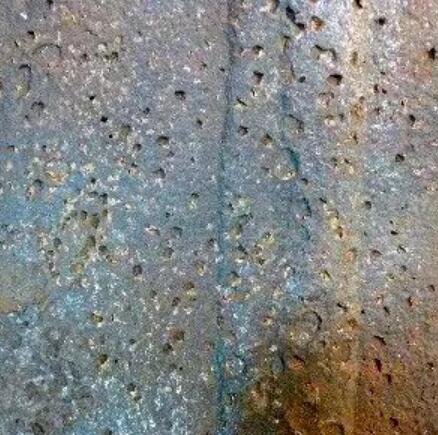 Steel surface passivation film due to the presence of defects in the steel, inclusions and solute inhomogeneity, so that the passivation film in these places more fragile, in a specific corrosive solution is easy to be destroyed, the damaged part will become activated anode, the surrounding area becomes the cathode area, the area ratio of the two is very small, the current density of the anode is very large, the active dissolution is accelerated, then become many needle-like pores. 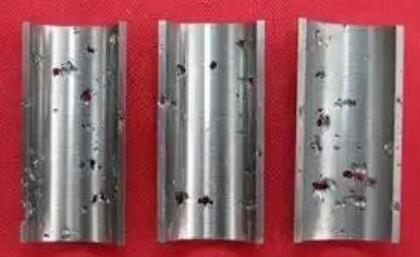 The passivation film originally has the function of metabolism and self-repair. So that the passivation film in solution in a dynamic equilibrium state of continuous dissolution and formation at any time. If the solution contains Cl-, this equilibrium is disrupted and small etch pits (mostly 20-30 microns in diameter) are formed at local locations on the metal surface. These small pits may also be repaired subsequently, i.e., repassivation occurs so that they no longer expand. Such small pits that no longer expand are generally open. Although the formation of small pits can be randomly distributed anywhere on the smooth surface, but if the stainless steel surface there are sulfide inclusions, grain boundary carbides or other weak points. Then small pits will preferentially form in these places.
For example, the dissolution of sulfide (MnS) on the surface of stainless steel will expose the fresh (i.e., no passivation film) steel surface, promoting the formation of small etch pits. And accompanied by sulfide dissolution according to the following formula reaction.

The generated H+ (or H2S) has an activating effect on the metal, which prevents the repassivation of small pits. It makes it continue to dissolve. Etch pits dissolve to more than a critical size (tens of microns) making it a source of pitting.
In addition to sulfides on the steel surface, in the case of natural corrosion (i.e., not polarized by an applied current), the presence of dissolved oxygen or cationic oxidants in solutions containing Cl- can also contribute to the dissolution of small etch pits as a source of pitting. Their role is to promote the cathodic process, so that the corrosion potential increases to more than the critical potential for pitting corrosion.

2. The expansion of the long corrosion source and the development stage of pitting corrosion

The test proves that in the initial stage of pitting corrosion source expansion, the dissolved down metal ion Men+ undergoes hydrolysis to generate H+:

The pH of the solution layer in contact with the small etch pits decreases, forming a strong hard solution zone, which in turn accelerates the dissolution of the metal and makes the etch holes widen and deepen. With the deepening of the corrosion hole and the formation of corrosion products covering the pit, so that the hole inside and outside the solution between the material migration more solid difficult, the hole metal salts more and more concentrated. This on the one hand by the decomposition of its water leading to a growing decline in pH; on the other hand, by the excess of positive charge in the hole to form an electric field, so that Cl- through the pore and corrosion products (cover) pores through electrophoresis constantly diffuse in, resulting in the enrichment of Cl- in the hole. This with the local corrosion process, so that the occlusion area (within the etch) more and more acidification process is called "autocatalytic acidification process". The pH of the solution in the etched hole and Cl- enrichment can reach a very serious degree. This strong acid environment in the etched hole makes the inner wall of the etched hole in the active state, as the anode; while a large area of the metal surface outside the hole is still in the blunt state, as the cathode, constituting an active state - blunt state battery system composed of small anode sub-cathode, so that the etched hole accelerates the expansion and deepening. The potential of this battery (the potential difference between the inner and outer surface of the etched hole) is the driving force for the development of pitting corrosion. The reaction inside the hole etching can be summarized in the following figure.

Reaction inside the pitting