What is sand blasting

What is sand blasting?

Sand blasting process is dry sand blasting. The abrasives can be steel sand, alumina, quartz sand, silicon carbide, etc., but quartz sand is the most widely used in China. Abrasives of different substances can be selected according to the requirements of part materials, surface conditions and processing.

The abrasive used in wet sand blasting is the same as that of dry sand blasting. The abrasive can be mixed with water to form mortar. The abrasive is usually 20% - 35% and stirred continuously to prevent sinking. Compressed air is used to press into the nozzle and sprayed to the parts. Sand and water can be put into the tank respectively and mixed before flowing to the nozzle before spraying to the parts. In order to prevent corrosion of steel parts, sodium nitrite and other corrosion inhibitors must be added in water, Sand should be dried before next use.

Shot peening is similar to sand blasting, but steel shot or glass shot is used instead of abrasive for sand blasting. Shot peening can produce compressive stress on parts, and there is no dust pollution containing silicon. This process is mainly used for:

For shot peening, which requires compressive stress on the surface of parts, it must have enough coverage, which is difficult.

Function and application of sand blasting 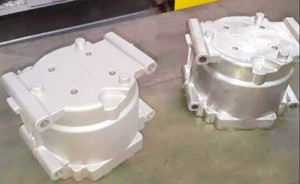 ▲ the left is the effect after sandblasting
Sand blasting is the most thorough, universal, rapid and efficient cleaning method. Sand blasting treatment can be arbitrarily selected between different roughness, but other processes cannot achieve this. Manual grinding can make rough surface, but the speed is too slow. Chemical solvent cleaning is too smooth, which is not conducive to coating bonding.

Wear protective equipment before work, and do not work with bare arms. At least two people shall work.
The air storage tank, pressure gauge and safety valve shall be calibrated regularly. The air storage tank discharges dust every two weeks, and the filter in the sand tank is checked once a month.
Check whether the ventilation pipe and sandblasting machine door are sealed. Five minutes before work, the ventilation and dust removal equipment must be started. When the ventilation and dust removal equipment fails, the sand blasting machine is prohibited to work.
The compressed air valve shall be opened slowly, and the air pressure shall not exceed 0.8MPa.
The sand blasting particle size shall adapt to the work requirements, generally between No. 10 and No. 20, and the sand shall be kept dry.
When the sand blasting machine is working, irrelevant personnel are not allowed to approach. When cleaning and adjusting the operating parts, stop the machine.
Do not blow dust or joke with compressed air.
After work, the ventilation and dust removal equipment shall continue to operate for five minutes and then shut down to discharge indoor dust and keep the site clean.
In case of personal and equipment accidents, the site shall be protected and reported to relevant departments.
Source: China Stainless Steel Pipe Fittings Manufacturer - Yaang Pipe Industry Co., Limited (www.yaang.com)
∧TOP
Next: What is shot blasting
Prev: List of Chemical Elements