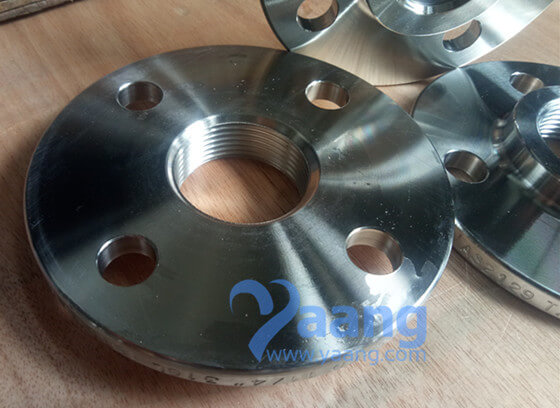 This type of joint connection is speedy and simple but not suitable for high presser and temperature applications. Threaded Flanges are mostly used in utility services such as air and water.

Threaded (Screwed) flange is similar to the Slip-On flange, but the bore is threaded. Its chief merit is that it can be assembled withour welding, explaining its use in low pressure services at ordinary atmospheric temperatures, and in highly explosive areas where welding create a hazard.

In Australia the BS and AS flange standards are essentially the same but have been metricated. Consequently metric sizes are stated as ‘DN’ (Nominal Diameter) in mm. Equivalent imperial sizing is rounded to the nearest multiple of 25mm (for 2” and over) as below. However the actual dimensions and bore sizes have not changed. ‘NB’ (Nominal Bore) is also sometimes used when referring to valve sizes.

AS2129 originates from BS10 and has been metricated. In some cases slightly larger bolt holes provide better clearance as metric bolts are specified in lieu of UNC bolts used by BS10. AS4087 is an update of AS2129, however AS2129 is still widely used so it has not been deleted as a standard, however, it now only covers AS table D, E to H.

Threaded bossed flanges can be fitted to pipes of various sizes without welding and this is one chief benefit for which these flanges are highly demanded.

Custom made as customers request.

Usually by Sea, By Air, By Train or River-and-Sea Coordinated Transport.

As per customer's request.

If any inquiry about products, please feel free to contact us sales@yaang.com